Welcome to Monday Ebooks, in which the Editrix indulges her most harmless delight in electronic publications, and welcome to another Teal Deer!

We’ve recently added two new devices to our stable: a Kobo eReader purchased at a closing Borders store and, most delightfully, a Nook Color from Barnes & Noble. We had large ebook libraries from both the Kobo and Barnes & Noble stores, so the purchases made sense; the former was the least expensive ebook reader we’ve ever purchased. (For those keeping score: yes, that makes SIX ebook readers. We are selling several of them, if we ever get around to it.) 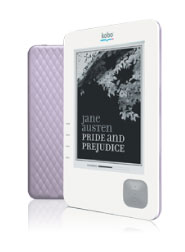 We can recommend both devices wholeheartedly. The Kobo is an excellent basic reader, with software updated in the past couple of weeks. It has wifi connectivity, though it is only used to download/sync books purchased from Kobo (you can sideload other epub-format books if they use Adobe Digital Editions DRM–except for books purchased from Barnes & Noble–and of course non-DRMed ebooks, no matter how they got that way *cough*). The device is light and has a 6″ eInk screen, so it is easy to read. The navigation, operated by a D-pad button on the front and four dedicated buttons on the side of the device, is a bit clunky, but once you get the hang of it, you can navigate relatively quickly.

Kobo has done a good job with the aesthetics–the fonts are attractive, the layout is excellent, and the books just look nice. Those who enjoy the aesthetics of good paper book design will find much to comfort them in ebook presentation on this device. Hardcore ebook geeks might complain–they usually want more control over appearance–but we think most readers will be very happy with the look and feel of ebooks on the Kobo device out of the box. (Our first ebook reader, the Cybook Gen3, is based on the same device, manufactured by Netronix, and the navigation is slightly less clunky, though Bookeen’s software is also quite elegant and has some capability that the Kobo does not–namely the ability to riffle quickly through pages in a book.) It was an excellent deal–though we confess to feeling a bit vulturish purchasing it in a store that was preparing to close, in which we’ve shopped before and which was well-stripped when we arrived. The young man who rung up our purchase positively gushed over what a good deal we were getting (it was $60, which is incredibly cheap for such a full-featured device). If you want a simple device that you don’t have to hack or fuss with, we can recommend the Kobo heartily, especially if you get a good deal on it; at Borders stores that aren’t closing, the device is currently $99, and Kobo is a separate company, so even if Borders’ fortunes should not rise after its current retrenching, your ebooks will be safe. In fact, Kobo is expanding internationally–our Gentle Readers in other countries might already be seeing, or soon will see, Kobo readers in their local bookstore. Kobo apps are available for every mobile operating system as well, so you can share your books between the comfortable, reading-centric experience of the Kobo reader as well as with your smartphone or tablet.

When a generous Barnes & Noble gift certificate fell in our way as a result of facilitating a book group discussion on Pride and Prejudice, we determined to use it to purchase a Nook Color, which we’ve been drooling over since it first came out. While we still prefer eInk for extended reading, the Nook Color is more comfortable for reading than we had anticipated–the Night reading function, with white type on a black screen, is great, and you can change the background color and brightness of the screen. One of the main functions we wanted for our Nook Color was to use it for crochet and tatting patterns–either scanned from paper (for our personal use, of course!) or purchased/downloaded as PDFs. We’ve read many complaints about the NC’s PDF reader and they are bewildering. The PDF reader works great for downloaded documents. (For reading PDF books, they are handled by the stock reading app, and functionality-wise it’s not as great–we recently read a NetGalley book that was a PDF that looked less than optimal–but we avoid them for the most part anyway.)

It’s an Android tablet, though made for reading. In other tablets, reading is an incidental activity–and probably not a primary activity for many users; we doubt people buy an iPad solely to read books. However, until today, the Nook Color’s more tablet-y functions were locked up, unless one was willing to break one’s warranty by “rooting” the device–hacking it to remove the stock operating system and add an open-source Android OS. Since the Nook Color is a couple hundred dollars cheaper than most other tablet devices, it’s been a popular choice for the rooters and hackers to have their geeky fun. Just today, B&N put out an update that uses a more advanced version of Android as its base, and which opens the device to apps. These are not stock apps, and there is no stock access to the Android Marketplace: the apps are made for the Nook Color, and have been approved by the dev team. The stock is small (and to many users disappointing) but obviously it can only grow from here.

Even before the update (which as of this writing we haven’t tried; we’re sitting here waiting for the slow combination of our outdated wifi router and the overworked B&N servers to download the stinking update file) we were still pretty happy with the Nook Color as a device. With wifi access, you can surf the web in a slowish but fairly full-featured manner–it’s a definite step up from our smartphone; there are some games and a really nice Pandora app. You can play music and videos in mp4 format. We think it just might replace George the EeePC as our travel device of choice, though we could wish for a WordPress app and the activation of the dormant Bluetooth so we can use an external keyboard and wireless headphones. But we’ll still use it mostly as a reader, and a way to carry and access our needlework patterns, mostly PDFs, which is one of the main reasons we purchased the device in the first place.

In our view, the main difference between proper laptops/netbooks and tablet devices is that the former is for creators of content, and the latter for consumers of content, iMovie guerrilla editors notwithstanding. 😉 For touch-typists, a proper keyboard is always going to be better than an on-screen integrated keyboard, and the aesthetics of a folding device will always be better for extended use. As a writer and blogger and a 100+ wpm touch typist, we prefer a proper keyboard. Work-related travel will continue to require a laptop-like device with a full operating system; but for leisure travel, we can see lightening our bag considerably by keeping our electronic footprint to three devices: smartphone, tablet/reader, and digital camera, and in some cases even eliminating the latter.

We’re a little surprised that B&N didn’t push through an Overdrive app with the update. Library book access on both flavors of Nook has been a selling point from day one. Now that Amazon has announced that Kindle users will soon be able to access library ebooks without the in-between Adobe Digital Editions sideloading step, it’s a little surprising that B&N hasn’t provided a way for at least Nook Color users to directly download library ebooks to their devices–and considering that the Nook Classic is also based on Android, it would behoove them to figure out how to give Classic users direct download access to Overdrive as well.

We’ll have more to say about competition between ebook format/device providers in the next Monday Ebooks. Until then, Gentle Readers, always remember: Ebooks Are Nice, Too!

17 thoughts on “Monday Ebooks: A Tale of Two E-Readers Edition”