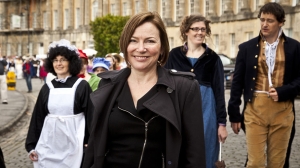 We’re a little late getting to this but after all as we’re on the Wrong Side of the Pond we shouldn’t have seen it at all. We have, from time to time, received interesting television transmissions via our dental work. That’s our story and we’re stickin’ to it. If anyone asks, blame it on La Niña.

Anyway, in late December the BBC broadcast The Many Lovers of Miss Jane Austen, featuring historian Amanda Vickery discussing the fans of Jane Austen over the 200 years since her first book was published, including attendees at the Jane Austen Festival in Bath and the JASNA AGM in Fort Worth, Texas. Considering some of the pre-broadcast hype for this program, it was way less cringeworthy than we expected, and in some places really quite interesting. We were concerned that there would be an aspect of “oh, look at the funny Jane Austen people all dressed up in their bonnets,” but Vickery made it clear that she has definite fangirl tendencies of her own. She didn’t go Full Bonnet, but she did insert herself in the Wet Shirt Scene, which we would frankly find way more embarrassing, mainly because it’s just so obvious.

While we enjoyed the program, and it was wonderful to see so many of our JASNA friends and acquaintances (and yes, that was the Editrix at about 50 minutes, engaging in one of her favorite activities besides reading Jane Austen–crocheting), overall the program struck us as being directed more at the Muggles than to the more knowledgeable Jane Austen fans. Most of the information in the program was not new to engaged Janeites. Vickery came off as a teeny bit of a Muggle herself, though that could have been for dramatic effect. “I’ve never seen a Jane Austen manuscript before,” she gushed at one point. It’s hard to tell if she meant she had never seen one in person and had the opportunity to handle it; but there are several Austen manuscripts right there in the British Library’s Treasures room, where any plebe off the street can ogle them. However, they are behind glass, and of course it’s a different experience to handle one.

Anyway, enough of our whinging. The show was a fun diversion for an hour and not meant to be taken terribly seriously. So, here’s the good stuff: END_OF_DOCUMENT_TOKEN_TO_BE_REPLACED