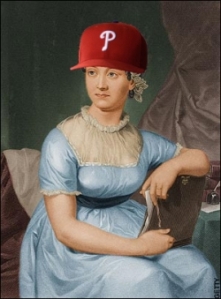 We already know about the presence of the word(s) “base ball” in the first chapter of Northanger Abbey, the first piece of proof that, since she was the first writer to mention it, Jane Austen must have invented the Great American Pastime; but the Editrix has stumbled across yet more proof that Jane Austen indeed invented base ball.

From Persuasion, Volume I, Chapter 9:

A dinner at Mr. Musgrove’s had been the occasion when all these things should have been seen by Anne; but she had staid at home, under the mixed plea of a headache of her own, and some return of indisposition in little Charles. She had thought only of avoiding Captain Wentworth; but an escape from being appealed to as umpire as now added to the advantages of a quiet evening.